So here's how bad I am at documentation. I'm finally getting around to posting some of the pieces I showed during the 2018 Gowanus Open Studios. I've added them to the front page of  TimothyCorbett.Art, and if you have a moment I'd encourage you to poke around there and tell me what you think.

Happily, many of these pieces are now in the hands of discerning collectors, whom I would like to thank for their generous patronage. The orange scale piece (immediately below) is still up for grabs though. 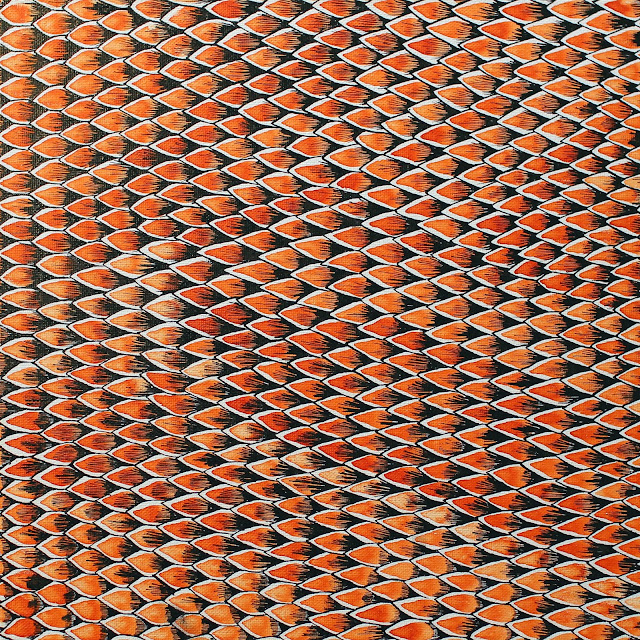 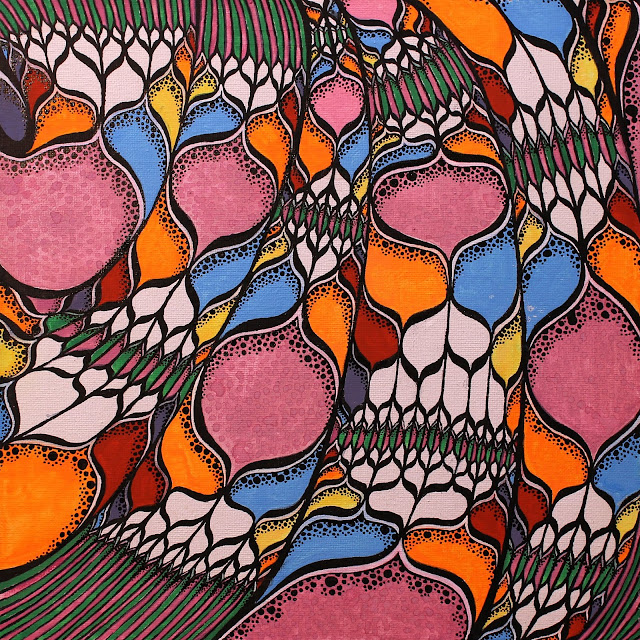 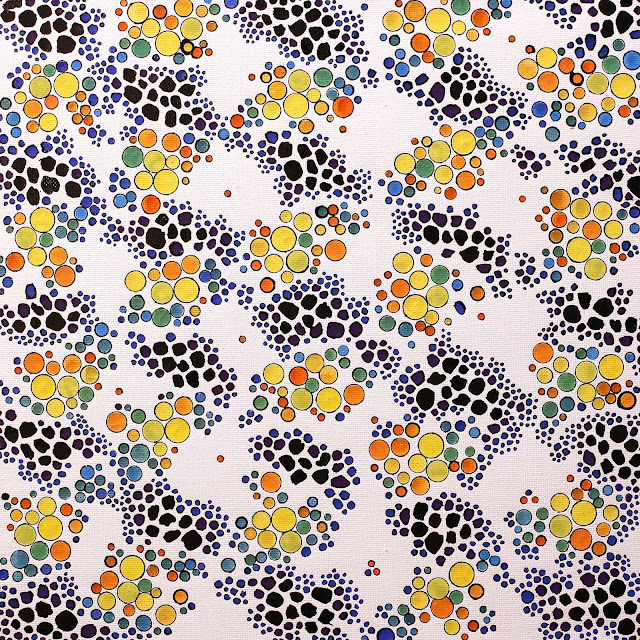 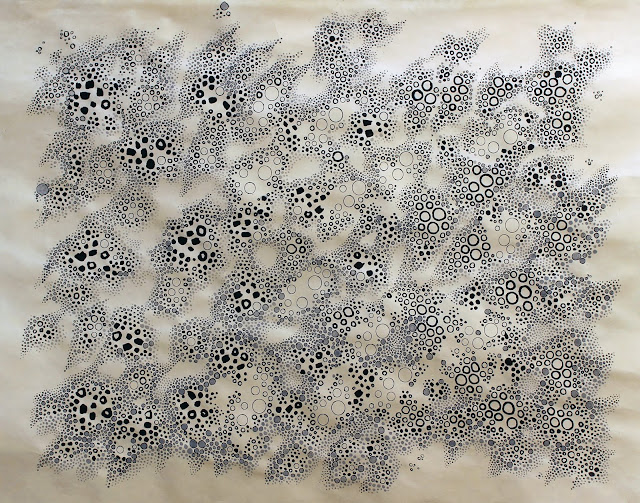 This piece is one I'm particularly proud of. It's a collaborative painting executed in conjunction with Carly Leinheiser. More of her exciting work can be seen at carlyleinheiser.com. 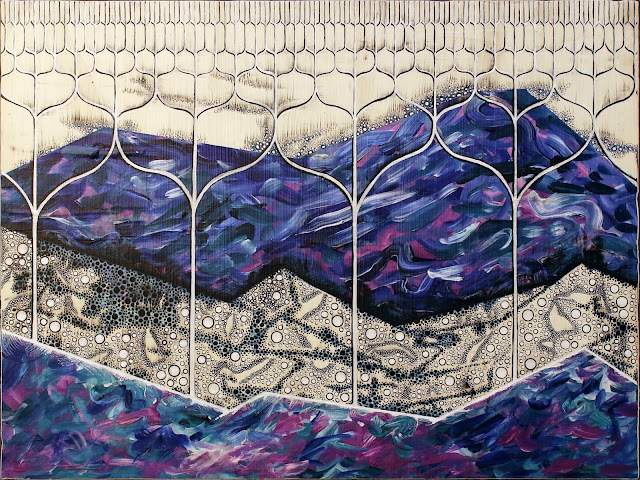 Posted by TIMYTHY at 9:11 AM No comments:

Hi everyone, I just submitted some work for a thing and, as is customary, had to come up with a new Bio and Statement, et cetera, et cetera. I'm trying to be more professional about such things. The Lord loves a workin' man. Anyhow, here is the statement, in case you're interested:

Using a variety of methods, I make dots happen. I think dots are important because they’re only dots when you get a few of them together. One dot is just a circle, and nobody wants those.

So there you have a bunch of dots, and some of them are bigger than others, some are closer together or farther apart. Depending on how the clustering goes, you can surmise that the dots came into the world via a natural process, arising mutually the way several dozen eggs might be uncovered by shifting desert sands. Other times, you will sense in the dots the hand of someone, trying to pull a fast one with said hand.

I became hell-bent for dots after spending a period of time studying a shagreen case for drafting tools. It was a handsome Victorian antique and I was determined to recreate something of the scaly, bumpy pattern in the steel blade of a saw I was designing.

You can lose yourself good and proper in a shagreen dot field. Trying to draw it for myself was a piece of work. I kept latching onto various clusters and trying to form patterns. This is called pareidolia. Pareidolia is a visual form of apophenia, which is a tendency to recognize patterns in otherwise random stimulus.

All that sounds like scary stuff if it gets out of hand, but from my day job as an industrial designer, I knew that a little cognitive disinhibition is just the ticket when you want to professional creative your way out of a problem. Go ahead and see the shape of a household appliance in a passing cloud. Where else does one get ideas?

The incident with the drafting case was almost 4 years ago, and I have made a bunch of dots since then.

In the case of the steel dots plates, I had the idea that I would attempt to use some of my manufacturing tricks to make dots that were capable of reproducing themselves. The art was dots, but it was also a tool for making more dots. Industrial thinking will do that to you. Make the machines that make the machines and so on.

I had recently gotten my hands on a Kelsey Excelsior platen press, so I designed the dot plates to fit in the chase. To date, I have pulled one set of impressions on newsprint just to prove the whole process works, but so far no tidal wave of inky dots has issued from the press. I’m coming to grips with that.

I’ve placed additional images of the dot plates in a gallery on my website to better illustrate the project: https://www.timothycorbett.art/dot-plate-project

Posted by TIMYTHY at 8:38 AM No comments:

All I can say is, "what goes around, comes around." 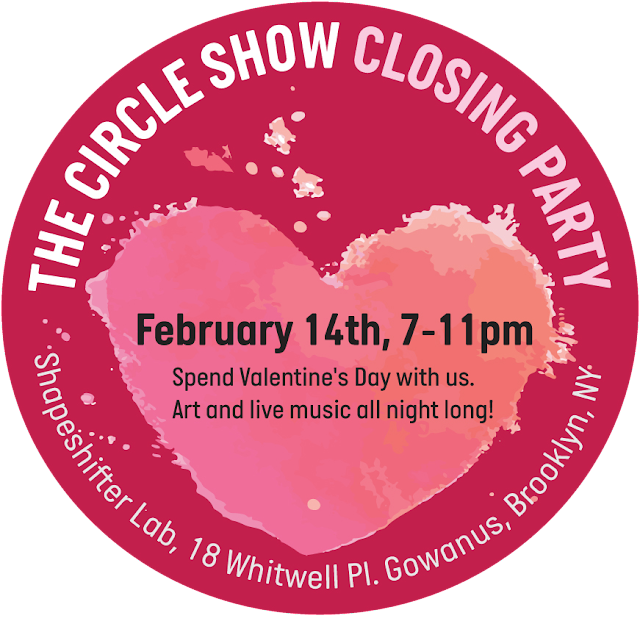 Yes friends, the Shapeshifter show has come full circle. We're going out with a round of punch and pi. The spot will be rolling with pretty big wheels so be there or be square.

Commodus will be hanging around, so by all means give him a spin. One good turn deserves another.

Posted by TIMYTHY at 8:12 AM No comments: